“We trusted Aperio Audio Visual from the moment we met them and the service is marvellous. They gave a demonstration at their facility, making it so much easier to see and hear what we needed. Price did come into it because there are so many types of audio-visual systems available, but they gave good advice and demonstrations of the options to help us decide. The picture clarity of the projector is amazing and exceeded expectation, as did the quality of the sound, which is important to us, as we're quite a musical family.” Hilary and Clive, home owners.

Challenge - Converting the basement to a home cinema room

As their new home was being built, Clive and Hilary planned to create a family games and home cinema room. Their three sons are film fans and the whole family enjoys music, so the sound system was equally important to them as the picture. Perfectly suited to the 11m by 5m basement space, they began researching different audio-visual systems. Clive believed a projector might give a poor-quality picture, so he was looking for an extra-large television and adding surround sound. Then they were considering a projector in the middle of the room on a piece of furniture but didn’t want to divide the room up. They were also concerned about the fragile, expensive equipment because with their sons or friends visiting, the projector and lens may have been vulnerable to anyone touching it. 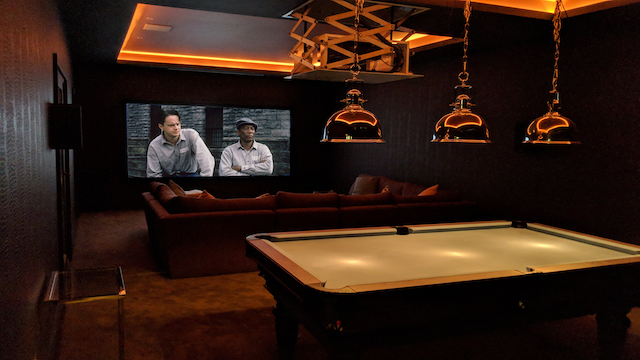 An internet search led Clive to Aperio Audio Visual. They arranged a visit to their specialist home cinema demo facility to experience the home projection system. After seeing the clarity of the picture and hearing the sound quality, Clive was extremely impressed. Aperio Audio Visual advised Clive on speakers and kit to create the surround sound effect he wanted, including Dolby Atmos and DTS:X and to achieve high volume sound with no loss of quality. Hilary found it an enjoyable process to design what they wanted and needed in the room to make it a relaxing and comfortable environment for all the family to use. Aperio Audio Visual planned an easy to use, single remote control from Control4 to link the music, projector, screen and sound - the teenagers can even connect their decks. They also installed a custom lift for the projector, which retracts up into the ceiling, protecting it from any potential accidents and blending into the interior design.
"Having built our house with support from so many tradespeople, we felt really confident with Aperio Audio Visual; they are experts in their field and we were happy to trust their advice and were impressed with the quality of their work. What they said we would have is exactly what we got." Hilary, home owner.

Impact - How the home cinema helps them relax and de-stress

The basement has plenty of room for a pool table as well as the big screen. Their elder sons are mostly away, but when they come home, it’s a big part of their weekend entertainment. They like playing pool, then the lights go down and they put on the latest film, catch up on box sets or watch the latest live sport. As the controls are so easy, each viewing option is a simple click away. The younger one loves to catch up on a favourite TV series, and they were all excited to see Blue Planet II on the big screen, which looked stunning. Clive listens to music on demand more frequently because of the amazing sound combined with the big screen making it a totally immersive experience and a feeling as if you are there present.
“Our lives are very busy, working hard every day. We do have a TV in the kitchen but going into the basement to watch a film or a TV show is an all-absorbing thing – a cinematic experience. There’s a small glass section in the ceiling, but we have a blind to make it completely dark, so you’re totally immersed in what you’re watching with no distractions. You can completely relax and de-stress.”
“The room is perfect for our Christmas family gathering. When we had a problem at 5pm last Christmas Eve, we were amazed Aperio Audio Visual responded to our call and Chris was able to resolve it for us. The service is absolutely marvellous.” 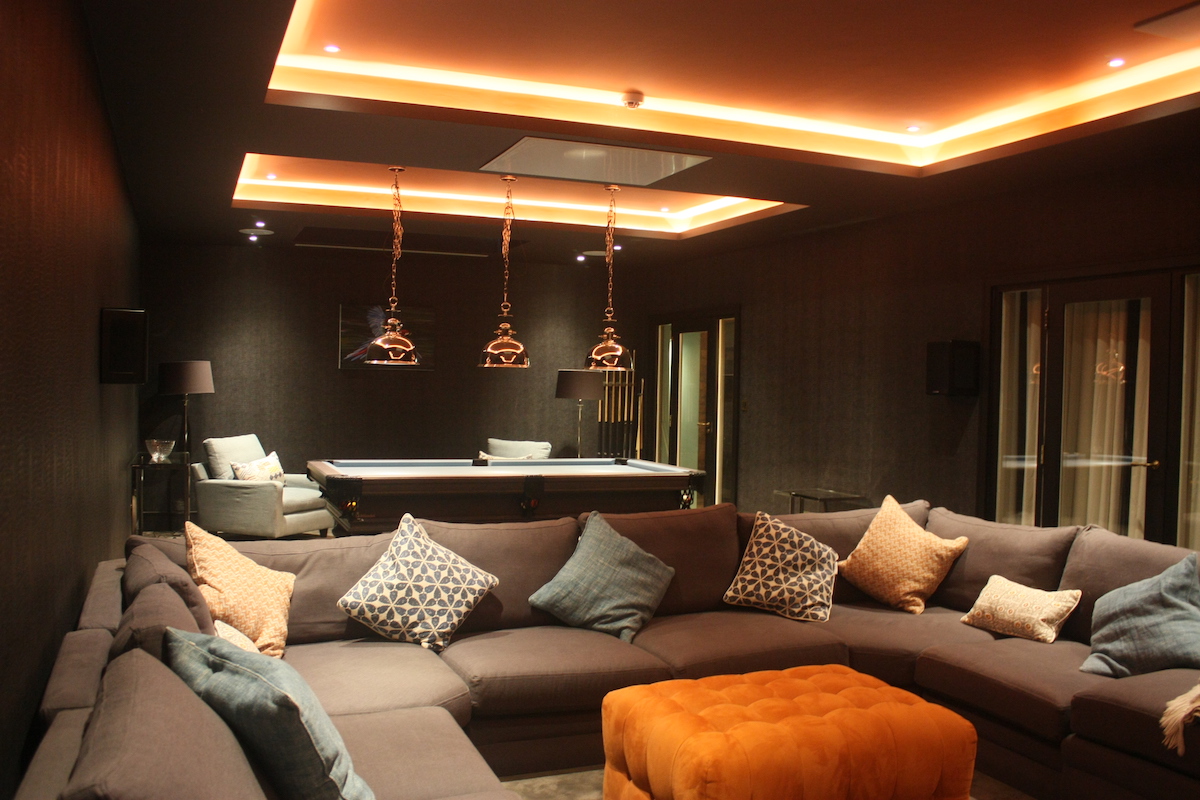